Permutation: “one of the ways in which a number of things can be ordered or arranged.”
Collins English Dictionary

Update: WOW- Thank you everyone!

This math problem was an order of magnitude larger than I imagined, thank you everyone for sharing your time and expertise. To all of you who participated, I’ll be in touch soon. If you haev any more updates to the problem, please comment below! Thank you, again!

Ever since introducing Mini Pans back in 2017, I’ve been amazed at the many different ways Pocket Palette owners have been customizing their palettes using our stainless steel watercolor pans. After scratching our heads about this around the shop, we’d really like to know–how many permutations of our four sizes of pans are possible in our standard Pocket Palette?

We’ll give the first three people who show us proof–or at least a good enough argument to convince us–a free Essential Colors Pocket Palette and a water brush. 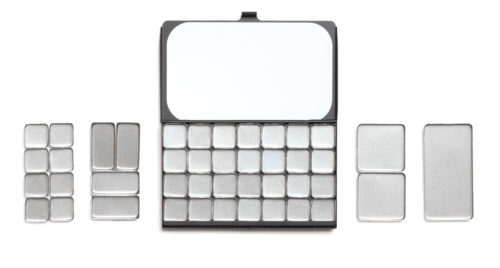 The Essential Colors are now available in the Demi Palette!

Video demo with tips and techniques.

What do you carry for inspiration to keep you going?

I made a video demonstration with tips for filling palette pans.

A palette filled with 14 of my favorite paints.