The reason I am tramping around in sub-arctic peat bogs and tidal mud flats in Alaska is to learn about long distance migratory birds with scientist Nate Senner. He has studied a fascinating shorebird for the past nine years, the Hudsonian Godwit (HUGOs). The Godwit family has the longest recorded non-stop flights of any bird. Nate’s research HUGOs migrate about 9,300 miles between this Alaska region and Chiloe´ Island at the southern tip of Chile. On their return flight north, the longest nonstop flight Nate discovered was 6,162 miles! Seven straight days of flying is epic, especially considering energy consumption and their small, lightweight bodies. 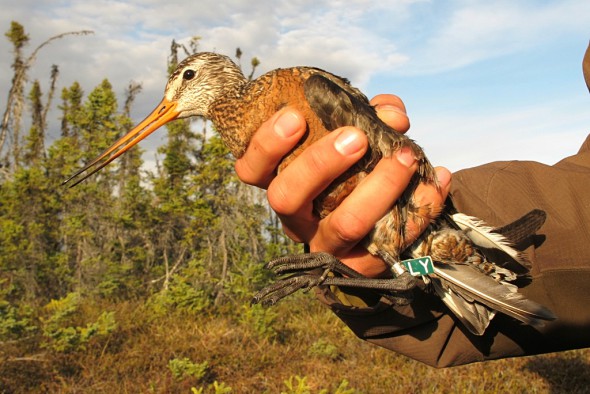 Nate has tracked Godwit migration using geolocator ankle bracelets. These small devices (about 1″ long with the ankle cuff), consist of an electronic chip, light sensor, and a battery that can last for up to three years. As the birds fly, the geolocators take a light reading every minute of every day, and record the max light level for every 5 minute period. By modeling cycles of light and dark each day, sunrise, sunset, and peak noon can be calculated. This can be correlated to longitude and latitude with an accuracy of 60 miles, and show the general movements and timing of the birds’ migration. 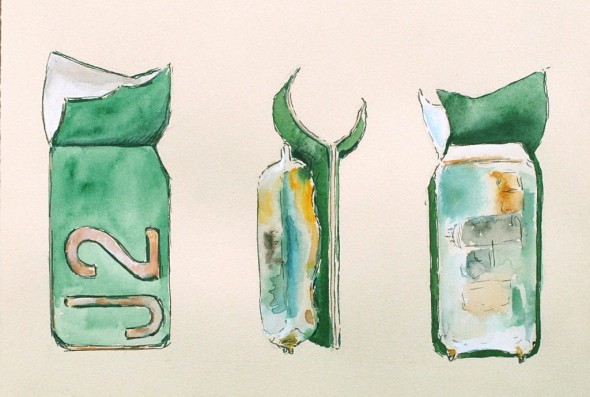 Nate has tagged HUGOs from Beluga for three seasons, and has found that they have five key sites along their migration route after leaving Beluga, Alaska in the fall. First, they head to Saskatchewan, Canada, where they feed for about 40 days to fatten up for their voyage. Next they go down to the Amazon basin of Colombia, and then on to Buenos Aires, Argentina. Finally, they fly across the Andes mountains to Chiloe´ Island, where they spend the winter. To make the return trip to Alaska, the HUGOs leave Chiloe´ around April 1st, and fly straight to Kansas to spend a few weeks feeding in a region of historical marshland that now consists of flooded agricultural fields. Then the birds make a direct flight back to Beluga to nest and start the process all over again.

By tracking multiple migrations, and collecting additional environmental data and chick survival rates, Nate hopes to learn how the birds may cope with pressures from climate change. More on that soon, as well as how to actually find and tag HUGOs!

This is the third in a series of posts from the field. Read the next one or start at the beginning!