Thank you to everyone who braved the stormy Seattle weather for Nerd Nite yesterday! My dad Seelye Martin and I had a blast presenting our “Ice Capades” in Greenland. It was the first time we’d presented together and I have to say, he’s a hard act to follow! 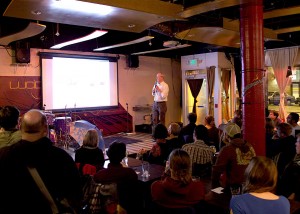 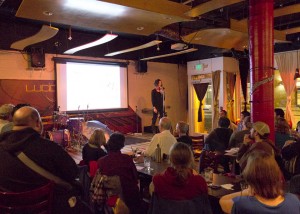 I also want to add a note about a slide I shared, this beautiful image of Arctic Fauna by German artist Gustav Mützel, published in an 1894 encyclopedia. The bird on the left looks suspiciously like a penguin, which doesn’t live in the Arctic… but the artist didn’t make a mistake! It’s a Great Auk, large flightless birds which were sadly hunted to extinction by the mid 1850s. What a shame. It makes me wonder what creatures we take for granted today may be gone in 100 years, or sooner!

I invite you to join me in my upcoming summer and fall workshops.

I am exhibiting a collection of polar paintings through May 16th.

Opening Oct. 5th in Seattle for the Fremont Artwalk.

I’ll be sketching at the launch of a polar monitoring satellite!

Join me to sketch wooden boats!

Join me in a sketching event hosted by artist Marc Taro Holmes.