I was a vegetarian for 12 years until I started traveling. I strayed from my herbivore habits in 2002 when I traveled to Mali, West Africa for the first time with a Carleton College study abroad program. I wanted to fully experience foreign cuisine and didn’t want to be a picky eater. My host mother and I walked to the local market together after we first met and bought a chicken together. I first saw the bird alive, and next thing I knew we were walking back to the house together with a warm bag of meat. After a chicken dinner that night, I opened my mind to eating adventurously. 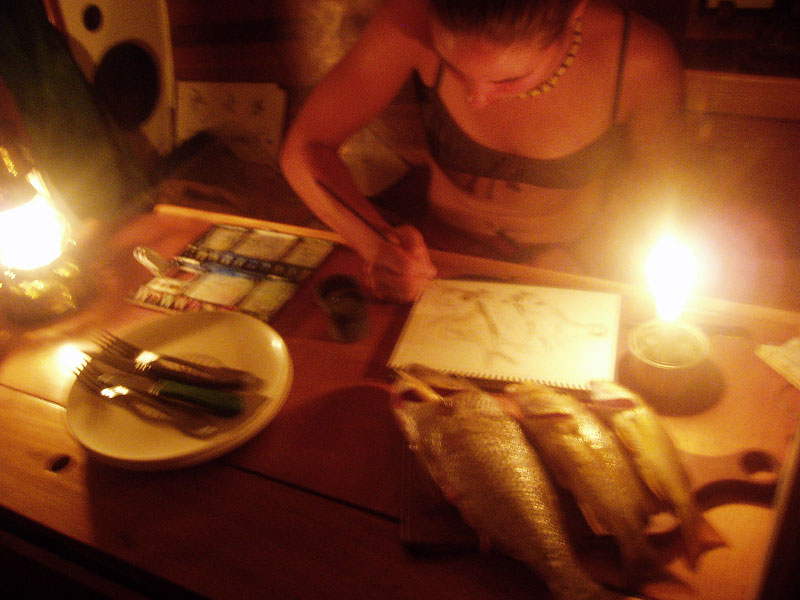 Since that night, I’ve experience a number of memorable meals while traveling including catching my first fish and eating it, hunting game in Mali, and skinning seals in Greenland. My first time fishing was in French Polynesia in the Marquises Islands. I met a Frenchman, Didier, who was exploring the islands and invited me and another woman to join him on board for sailing. When he learned I’d never fished before, he setme up on the bow of the boat with a rod and told me to be patient. When I felt a nibble, I pulled up and landed a small, silver fish. “You caught one!” cried Didier, who came over to help me prepare it for dinner. We each caught a fish that night and mine was the smallest. “You caught it, you eat it,” Didier insisted. “Okay,” I replied, “but only after I sketch it. I completed a quick ink and watercolor sketch by lamplight. 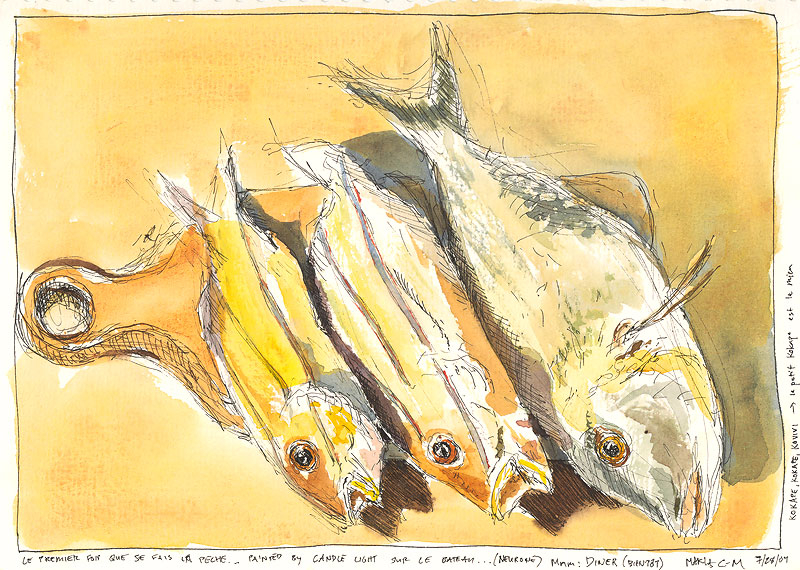 In Mali, West Africa, I spent close to two months living in the desert with semi-nomadic Toureg. I met them through a wonderful musical group Ensemble Tartit who first invited me to the Festival in the Desert in Essekane (60 km from Timbuktu), and then introduced me to their extended family. Living in the desert, I drew continuously, learning the local language, making friends, and learning the rhythm of the land. The Tuareg have a traditional saying, “Aman iman, axx isodak, isan telmdu, isink esuk” which translates to, “Water is life (the soul), milk is food, meat is flavor, and everything else just fills the belly.” I craved and drank milk daily and often spent afternoons accompanying two friends hunting in the the forest (low, scrubby trees) to supplement dinners with meat. Tip-toeing and watching rabbits and birds, I learned the names of trees and animals. I also learned to shoot a rifle and how to skin a rabbit. More so, though, I learned to appreciate where my food comes from. Hunting was not a sport to my friends. Whatever we brought home was shared with the family and gave flavor to a diet of rice, few vegetables, and milk. In terms of adventurous meals, I ate game animals and just about every part of goat and sheep (including stomach for breakfast) 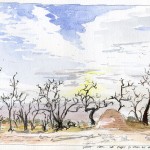 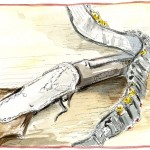 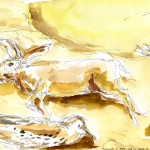 My appreciation for hunting and wild game continued in Greenland. In the north, imported foods are expensive as well as infrequent in the winter. Seals, walrus, and fish are necessary components to peoples’ diets. I’d tasted seal and whale with friends, but it wasn’t until late one evening that I learned the process of skinning a seal. It was 11pm one foggy evening and I was lying in the Upernavik Museum Refugium, where I was artist-in-residence. I’d tacked towels up over my windows to block out the light and was trying to fall asleep when my phone rang. My friend was calling me, and invited me to the dock where he was just back from a hunt. Curious, I trotted down to the waterfront where my hunter friend was out by his boat beginning to work on a ringed seal. I kneeled down and began helping clean the innards. Soon after I arrived, my friend reached into the animal and pulled out the liver. He cut off a piece for himself and another for me. “Here,” he said, “this is one of the best parts- it’s nutrient rich.” I accepted his offer, and ate the freshest piece of meat I’ve ever tasted. 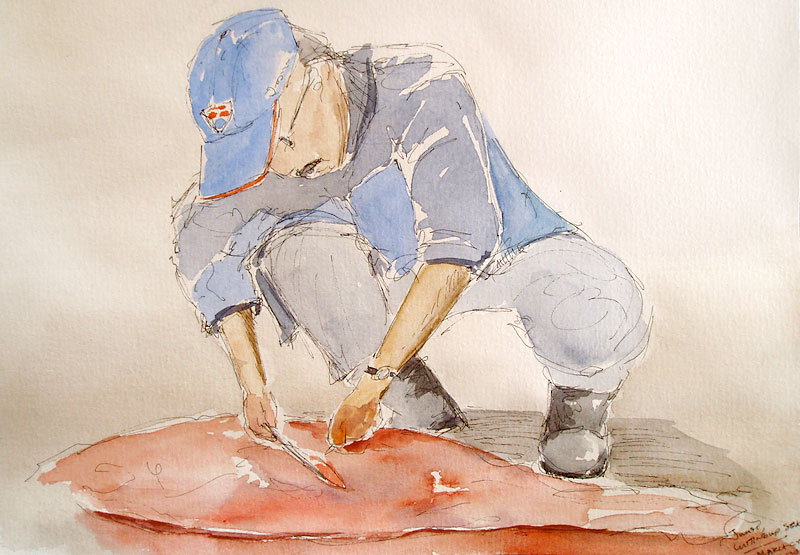 These experiences and others have given me an appreciation for learning where our food comes from and for the process of obtaining it. While I habitually eat vegetarian now, I am respectful of cultures and traditions that do eat meat and will always accept an offer to try something made with love. Of course, I like to sketch it first.

I’m excited to paint on an arctic island in Norway this summer.

Sketches and observations of research tools.

Sketches and stories from my travel to Arctic Alaska.

Sketches inspired by a family adventure.

I want to stand up for love and compassion in the USA.